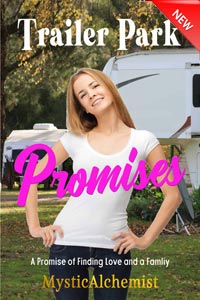 A cute young woman making a home amongst a trailer park filled single men. That’s the beginning idea for my story Trailer Park Promises. I’ll show how I expanded the idea to a happy romance, with just a hint of the taboo.

I called her Erin. She arrived in the park driving an old purple car, and set up home in a one-man tent. Our man Peter, a man old enough to be her father, was one of the many watching. Erin kept her distance from all. Some said she went each day to care for her sick mother. Others rumoured she was not all right, but Erin kept her distance from all until she’d made her choice.

“You walk around here often?” she said to Peter yearning the father she never had.

“I’d love to walk with you,” he said ignoring the rumours and wanting the love and family he’d dreamed all his life.

Their romance quickly grew, with Erin exacting promises from him, and even though he thought she had problems, his infatuation pushed them away until it was time to meet Erin’s mother.

Even before they’d arrived at the mother’s house, Peter had managed to upset his love. Then the first meet did not go well. “I think I’ve set a new world record for upsetting two women I wanted in one day.”

“You were right though.”

“Sometimes there’s more to life than being right.”

With that, Peter resolves to change from the past and make the effort to bring a future filled with love, whatever it take. A future with two loving women was better than existing alone in a silent cold trailer working a soulless job.

Does this story have a happy end? Of course. Peter dreams their future, and empowered with the love of the two women, makes preparations to lift all their lives to a new and brighter place. I do love a happy end.