Casterton is a small town in the rich pastoral area of the Western Districts of Victoria. A town where everyone knows everyone else and most are referred by their nick names, and secrets are hard to keep secret.

With the possibility that we might end up moving here in a few months, I began thinking of possible stories I could write. Stories that no one in town would know the authorship of. 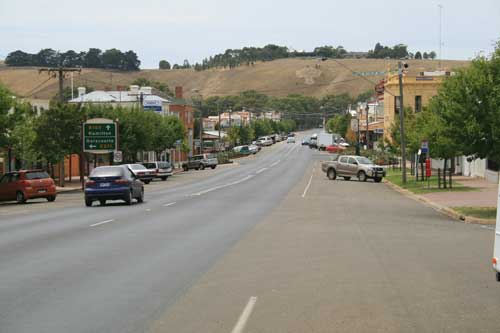 In past years, the town was the retail and service hub for the outlying farms, spreading from the bridge and growing along the side of the main road, but today, for most people, it's just another delay on the rush between bigger cities.

I had taken the bridge photo for the cover and decided on the title before I’d even decided what sort of story it would be. I knew it would be about the claustrophobic feeling I felt living in a town like that. About the stories whispered in the background. Of the feeling everyone knew what you were going to do before you did it. Some people took solace in living in such a town, and some didn’t.

Gradually my thoughts firmed in the story being about two young people trying to negotiate love in that town. One of them fearful and the other accepting and willing to take on the rumours head-on. As I plotted that story I also realised it was a story that had been written in a hundred other books, most of them better than I could do. That is when I changed to make most of the story about Luke’s mother and her attempt to make sure she has a future too.

The new story felt better to me, and that made writing it much more pleasurable. In many ways, the town owes its life to the bridge, and it was this bridge that I turned for inspiration to create this story.

I’ve used a bridge in the Adelaide Hills for my photos. Although it is smaller than the one in Casterton, it has the same character and sound, and as in the story, it does offer an illusion of privacy from the world around.

The story starts with the bridge. A place of security and privacy to match our man Luke’s mind. A comfort that is shattered with Katelyn’s suggestions, and once that comfort is disturbed, so the bridge looses its place, as Luke’s outlook on life, and the town, changes.

My favourite character is old Tom, Luke’s boss. A man of few words. He’s lived here forever, the hardware shop his life. The one that gave Luke a job because he knew his widow mother needed the help. A pillar of the community even though he knew all the gossip and stories. There should be more Tom’s in the world today.

Katelyn - Three in a Bed.

Katelyn, Luke’s girlfriend, knew exactly what she wanted in her future, and that was her man Luke and a family. She certainly hadn’t planned on living in the same bed as Luke’s mother, and she would never have planned of taking turns with her mother-in-law to love her man on the kitchen table.

What would the town gossips say?